skip to main | skip to sidebar

In the summer of 2000 I was a novice. Bodybuilding had only recently taken root in me. I had done my first competition, an embarrassing affair. An inauspicious beginning, yes. But I was hooked. Bodybuilding had entered my soul and ignited a passion.

Frank Zane had been an influence on me from prior years, when my trainer had introduced me to the name. Frank’s physique made an impression me, not only because of its near-perfection, but also because Frank was around my height and had a similar build to begin with. Frank Zane began to become a personification of my bodybuilding goals. And besides, Frank Zane was mysterious. He had become involved with Buddhism and meditation. He had been a mathematics teacher, of all things. He was an enigma, and I liked that.

In those days Frank offered a 3 day one-on-one training program in his private gym. I decided to go.

And so it was in the summer of 2000, after a 5 hour flight from Toronto, I arrived late on a Sunday evening in San Diego. I picked up my rented car and drove to La Mesa. Next morning I called Frank for directions. Soon I was driving up the hill to Frank Zane's house, where the first one to greet me was Tyler, the family dog. As you might expect, Tyler was big, and in shape. Frank Zane's dog, right? I walked across the back lawn into the garden doors that lead directly into the gym.

Frank was milling about, and we quickly got acquainted. First impressions are always interesting. Frank was cool and cerebral. Very focused. Over the three days I spent with him, those initial impressions proved to be accurate. But there is another side to Frank I did not notice until later; he is very candid. And so I pressed him with questions as we did the training. Questions and comments like “what was it like … “

There were surprises. One of those surprises was Frank’s tone when he spoke of competing. Here was a man who won top honors in competitive bodybuilding, a three time Mr. Olympia. One of the tiny handful who beat the great Arnold Schwarzenegger in competition. But surprisingly Frank did not sound like he loved that time in his life, nor did he sound like a man who missed being in the thick of things. In fact, he spoke of his days as a world-class competitor as something he was glad to be finished with. He reminded me that to compete the way he did was a sacrifice of profound proportion, a sacrifice on many levels. His focus was so intense and complete in those days that he went for long periods where he did not even talk to anyone. Kind of like a monk's vow of silence. (Gee, I thought, isn't pre-contest dieting enough of an austerity?) When I asked him if he intended to enter competition ever again, perhaps in the Masters Olympia, the answer was a resounding no, without hesitation. I glanced over at the three Mr. Olympia statues, unceremoniously displayed on the top of his fridge. They concurred.

Nowadays Frank had more modest goals, though still daunting. His main goal was to reach peak condition again and present his physique to the world at some point in the future. (That ended up being six years later at age 64 - see picture below.) But he was adamant that he would never again put himself through the rigors of competition. 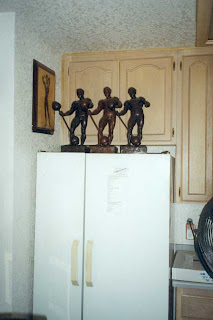 The 3 day training we did, “The Zane Experience”, is unusual in that Frank is no personal trainer, in the conventional sense. He’s Frank Zane, three times Mr. Olympia, and one of the most unique bodybuilders in history in terms of size, proportion, and posing. During the workouts, Frank was my training partner. He did a set, and I did a set. I got to watch him, watch his form, his approach, and his intensity. Then he would correct my form as I trained. That in itself was remarkable.

The routine we did was Frank’s personal routine. This is the routine that works for Frank Zane. In other words, a routine created for him based on his own level of experience, goals, and limitations. On that latter point, Frank has to deal with a 58 year old body with its attendant quirks and demands, as well as specific injuries and prior surgery. I will naturally have a different set of these parameters, and so my task is to integrate these two blueprints, to come up with a revised blueprint for myself.

On this day Frank has a new 3-way split routine, which we did over the three days I trained with him. These three days are orchestrated in descending order of physical taxation. Day 1 is upper torso, including back, chest, and shoulders. It’s a big workout. Day 2 is legs. Day 3 is arms, including biceps, triceps, and forearms. Additionally, all three days end with an ab workout.

As for the subject matter covered in the non-training part of the sessions, we spent lots of time talking. We talked about diet, nutrition, and supplementation. On the third day, Frank took outdoor pictures of me posing, and then told me that it was important to have someone take photos of my physique on a regular basis, in order for me to objectively see the progress (hopefully not the lack of progress) and to have a pictorial record of that progress. 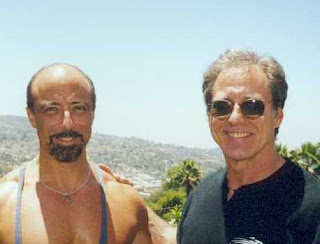 We spent a lot of time on posing technique. Frank showed me that posing began with correct foot placement, something I really did not yet grasp. He even traced the position of his feet on a piece of construction paper with a felt marker. He rolled it up and I took it home like someone fresh from a dance lesson. But the point was clear. This was the basic stance, a base from which other foot positions were born, and from where the poses grew upward like a tree would grow. From its roots. The result was that my poses began to look a lot better.

Frank’s Pre-Competition Advice
This is how he did it…


• Sodium maintained at 1 gram/day beginning two weeks out.
• Last workout on the Tuesday preceding the Saturday show (4 days out).
• Legs: Stop squatting two weeks out, but continued leg extensions every day and constantly tensing and posing the legs.
• In general, increase volume and do more exercises as the date approaches.

Carbs For The Final Week

Monday, Tuesday, Wednesday: 100 grams carbs/day.
Thursday 150 grams carbs
Friday 200 grams carbs
Saturday (day of the show): Awakened at 6:AM. Ate a slice of baked yam, and continued to each one slice every 45 minutes or so, up to one hour before the show, for total consumption of not more than 2 yams or so.

Frank took no diuretics and did no radical cutting of his water intake prior to the show. 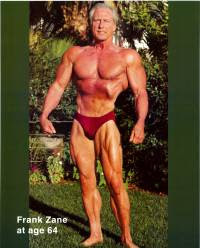 These articles are about actual experiences with significant people or events. Just to the right you'll find my latest story. Scroll down on the left column and you'll see more current updates and links, buttons to buy my music.

Most importantly, I always look forward to your comments.